Are you thinking of flower?
Which color?
Which size?
What’s your first thought?

Or maybe you watched a film by Roger M. Richards?
In this way, the secret is known.

Sarajevo Roses are red, red like a blood which appeared on the street after mortal shell’s explosion.  Sarajevo Roses have shape of the flower, shape which was given by marks of the explosion.
Sarajevo Roses are painful memories, filled with red resin after the war. They are unavoidable part of history. According to the stories, they grew by the death and they were watered with the tears of those who survived…

Sarajevo Roses became very popular tourist attractions and… they have started to disappear…
Is it caused by renovation ? or maybe Bosnians want to keep their history for themselves? 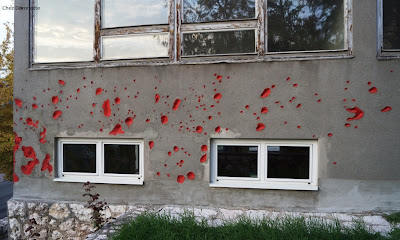