Sarajevo - The Jerusalem of Europe


Sarajevo is often called The Jerusalem of Europe or The Jerusalem of Balkans. And hearing it, you shouldn’t think of the conflict, but importance of various religious groups. Only in these two cities, you can find temples of four world religions, just few steps from each other. Sarajevo was always a multicultural city. There is something amazing in it, people are open-minded and they celebrate Bajram and Christmas together.  Walking through the city you can hear church bells and the ezan (it’s the Islamic call to prayer), sometimes they appear almost in the same time.

Just take a look on the pictures below and try to understand about what I’m speaking. If you know the city, you’ll find all temples without any problem. If not, just follow the second shot.

Looking from the left: Cathedral of the Heart of Jesus, Serbian Orthodox church, Old Jewish Temple (only its roof) and Gazi Husrev Bey’s Mosque. 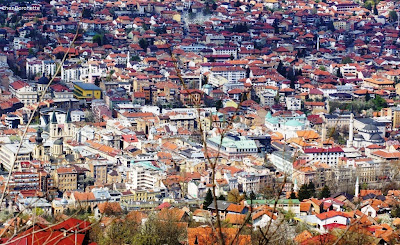